There are some great stories in this book. From Mike Flynn's real role pre-Trump Admin, to a hundred other people's stories as they manipulated social media or tried to prevent it in order to have real world effects. This book draws a compelling narrative. It's well written and it holds your interest.

That said, it feels whitewashed throughout. There's something almost ROMANTIC about the people interviewed through much of it. But the particular take the authors have on the problem illustrates an interesting schism between the technical community and the academic community. For example, in the technical community, the minute you say something like this, people give you horrible looks like you were doing a Physics lecture and somehow wanted to tie your science to a famous medieval  Alchemist :


Carl von Clausewitz was born a couple of centuries before the internet,
but he would have implicitly understood almost everything it is doing to
conflict today.
What's next? OODA Loops?!? Sheesh.

In a way though, it's good that the book started this way, as it's almost a flare to say exactly what perspective the book is coming from.

Two other early pieces of the book also stuck out:


For it has also become a colossal information battlefield, one
that has obliterated centuries’ worth of conventional wisdom
about what is secret and what is known.
And:


And in this sort of war, Western democracies find themselves
at a distinct disadvantage. Shaped by the Enlightenment,
they seek to be logical and consistent. Built upon notions of transparency,
In other words: This book has a extreme and subjective view of government and industry and an American perspective. Its goal is often less to explain LikeWar than to decry its effects on US geopolitical dominance. We have a million Cleared individuals in the US. Are we really built on notions of transparency? This would have been worth examining, but does not fit with the tenor of the author's work here.

The book does bring humor to its subject though and many of the stories within are fleshed out beyond what even someone who lived through them would remember, such as a detailed view on AOLs early attempts to censor the Internet:


AOL recognized two truths that every web company would
eventually confront. The first was that the internet was a teeming
hive of scum and villainy.

That said, anyone who lived through any of the pieces of this book will find lots missing. Unnoticed is the outsided role of actual hackers in the stories that fill this book. It's not a coincidence where w00w00 or Mendax ended up, although it goes unmentioned. And the role of porn and alternative websites is barely touched upon. How the credit card companies have controlled Fetlife would be right in line with what this book should cover, yet I doubt the authors have heard of FL (or for that matter could name the members of w00w00). Nor is Imgur mentioned. It's also not recognized that the same social network the intelligence community uses to publish their policies (Tumblr) is 90% used for browsing pornography.

Clay Shirky, the first real researcher into this topic, who gets one mention in the book (iirc), pointed out that whenever you create a social network of any kind, it becomes a dating site. This is one of those axioms that can produce predictive effects on the subject matter at hand. Sociology itself has been revolutionized by the advent of big data from Big Dating. The very shape of human society has changed, as the spread of STDs has pointed out. And the shape of society changes War, so this book could be illustrating it.

At its most basic example, examining social networks involves looking for network effect - the same thing that drives most dating sites to create fake profiles and bots so they can convince people to pay for their service. These are primal features of the big networks - how to get big and stay big. As Facebook loses relevance, Instagram gains it, and as Instagram loses it....we didn't see any of this sweep in the book. Some topics were too dirty, perhaps?


Like many books coming out, this book is a reflexive reaction to the 2016 election and nowhere is that more evident than in the conclusion.

Some statements are impossible to justify:


Like them or hate them, the majority of today’s most
prominent social media companies and voices will
continue to play a crucial role in public life for years to come.
Other statements are bizarre calls for a global or at least American censorship regime:


In a democracy, you have a right to your opinion, but no
right to be celebrated for an ugly, hateful opinion, especially
if you’ve spread lie after lie.
The following paragraph is not really true, but also telling:


Of the major social media companies, Reddit is the only one that preserved the known fake Russian accounts for public examination. By wiping clean this crucial evidence, the firms are doing the digital equivalent of bringing a vacuum cleaner to the scene of a crime. They are not just preventing

The authors, like many people, see the big social networks as criminal conspirators, responsible for a host of social ills. But for the past generations we have "Taught the Controversy" when it comes to evolution in our schools and it's hard to be confused as to why the population finds it hard to verify facts.

Instead of trying to adjust our government and society to technological change, we've tried to stymie it. Why romanticize the past, which was governed by Network News, the least trustworthy arbiters of Truth possible? We've moved beyond the TV age into the Internet age, and this book is a mournful paean to the old gods, rightfully toppled by disintermediation.

Still worth a read though.

Posted by Dave Aitel at 6:44 AM No comments:

In today's edition of "trying to figure out what things in the cyber policy world really mean" I want to highlight this extremely insightful thread on "Owning your data". 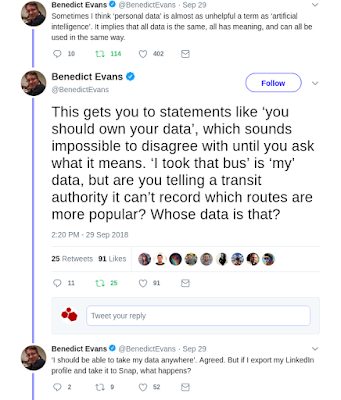 Obviously you're never going to get AccessNow and FS-ISAC or any other group to agree on what that means. But sometimes it's worth noting that a particular terms one of the policy groups is pushing doesn't really mean anything at all or (as in the case of "Surveillance software") encompasses a lot more than they want you to think it does.

Posted by Dave Aitel at 6:12 AM No comments: