The news is filled with cyber hot takes on Ukraine. As someone said to me a few decades ago though - "When it's in the news, it's operations. Our job is the future." And at some level, the war in Ukraine has been stamped out already in the astonishing fortitude of Ukraine, economic and political realities, and the also frankly mind-blowing efforts of various intel groups, only visible with the right set of binoculars.

One thing I struggle with when Forecasting, actually, something I see everyone struggle with, is that we don't forecast our own efforts very well. Nobody predicted we would drop a ton of highly sensitive information out into the NYT regarding Russian war plans. And if you didn't predict that (or worse, didn't notice it while it was happening), you missed a major strategic development.

A lot of the rest of it, cyber attacks on critical infrastructure networks, drone usage, face recognition being used for psyops, was easy to predict, but not as interesting other than for policy papers crowing about being correct in various journals (or, ironically, claiming coup for incorrect predictions and assessments).

Was it predictable that the Ukrainians would lap the Russians at social media information ops? I think it was, and I think the Russians would be the first to admit it was, when being honest to themselves.

But we do have conflicts closer to home. I want to say this only once, because it is a worry that not only I hold, but that nobody I know can say out loud: I worry about US.

Every recent science fiction novel has talked about a United States split to some degree along ideological grounds and I worry more about the Court's decision in June on abortion than I do the Russian conflict. You should too, and I want to illustrate why with a little sample from my neighborhood.

I took my kids to the local graveyard, a short walk away, in Wynwood, an "up and coming" neighborhood in Miami, famous for its art galleries and fine dining. It is an old graveyard by US standards. 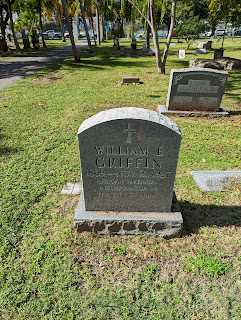 William E Griffon. African American Incorporator of the City of Miami. (Dedicated 2008)
There are all sorts of graves there, in all sorts of conditions. There's a Jewish section, with Hebrew names. Off on the side there's a section of "African American Incorporators of Miami". And right in the center of the whole graveyard the road runs a circle around a marble totem, adorned with fresh flowers. 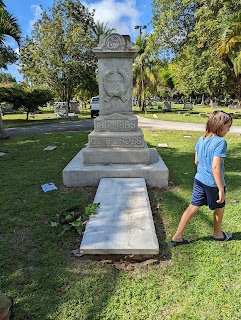 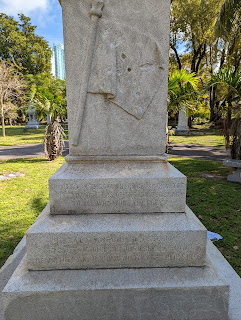 "To all who wore the Grey"
Who could possibly be being honored in this way, in the middle of Wynwood? 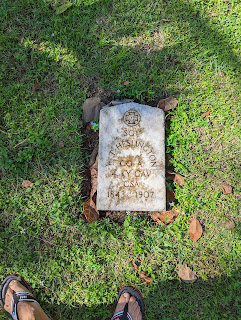 SGT W.T. Heslington, 4th KY CAV CSA
For people who don't immediately know: CSA is the Confederate States Army. We get a hint as to who is leaving the flowers from this fresh meeting notice pasted next to it: 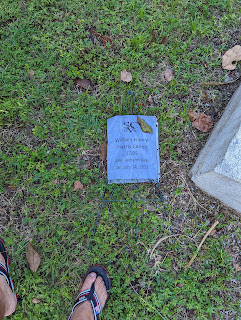 It's the local division of the Sons of Confederate Veterans, which is still a thing.
My point with this little photolog is not "Hey, here's a weird thing about Miami". My point is that if you're a professional forecaster, and you only read the parts of Sun Tzu that are EASY then maybe you're going to miss something important. You can't blame things that existed since the dawn of the Republic on Facebook.

Posted by Dave Aitel at 7:25 AM No comments: