I want to talk about my experience working for the Federal Government, but also look at some wrinkles in the Cyberspace Solarium's efforts to address recruitment and retainment. At some level, every government proposal to address this problem is a twelve-dimensional remastering of Groundhog Day. You can see this in the supporting document on Lawfareblog, which focuses on the military talent shortage, possibly inspired by a meeting with CyberCom?

Most reports of this nature nibble around the edges of the problem and the Lawfareblog article proposes the following:


All of the typical suggested measures largely ignore the the number one issue with recruitment and retainment which is the clearance system. In this day and age, not being able to offer a clearance within a week is insane. In many ways, we need to completely rethink the clearance system, which right now is a one way door - people are required to be working in the Government or for a Government contractor to hold a clearance, and when they lose it, they rarely get it back as it requires a full-on reprocessing, which can take years.

That brings me to my story. I filed for some scholarships in high school, one with NASA and one with the NSA. My high school grades were not great, but the NSA application included an interview and I was even then, as obviously geeky as it got. I had, as it were, mad Turbo Pascal skills, and some beginner assembly language, and the NSA had a voracious appetite for minority students in technical fields like computer science, which I already knew was my focus to the total exclusion of anything else, like social skills or any fashion sense. 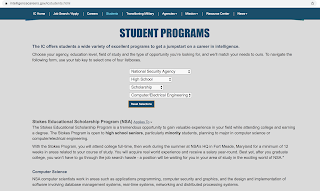 At the time the program was called the Undergraduate Training Program and started in 1986 (legend has it a member of the Congressional Black Caucus got a tour of the NSA and didn't see any minorities and threatened to yank funding until he did), but it appears to have been renamed the Stokes Educational Scholarship. I highly recommend it, if you are a high school student reading this blog, or happen to have one near you!

But also, I think the UTP/Stokes program has offered massive strategic advantages to the United States, getting students into the NSA who otherwise never would have considered it, who have gone on to contribute immeasurably to our national security. It has had high return on investment, in other words. So please don't take this blogpost as saying these efforts are not worth it. However, they will not change the game or solve the problem.

One reason for that is that these programs exist and have for forty years. So what are the new proposals in the Cyberspace Solarium efforts? 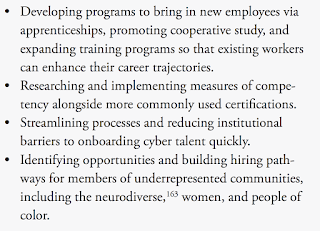 Not that we can't "Do more" but aside from the "institutional barrier" of clearances, it's hard to see what we can drastically change to open a huge pipeline of new applicants for the 33K billets we need to fill.

To be fair, the report acknowledges this pain point by asking for a new report!

If you've been following DARPA's work in the area, you may have noticed they've already done research on getting people a clearance in a week - we just need the political wherewithal to follow through on implementing it.

It may be, of course, that even with the clearance roadblock removed, the Culture roadblock, as identified by the authors of the Solarium report, would remain. Culture is not about haircuts and fitness levels - and in fact most hackers I know are very into Brazilian Jiu Jitsu and can run a reasonably fast mile.

Culture is about a deeper set of problems, none of which are in the cyber domain:
If exposure to Stop and Frisk already pre-tuned you to thinking that law enforcement was an unacceptable career path, you're not going to apply to fix IT security issues at the FBI.  CISA's mission may be amazing, but you can't retain workers who have their friends getting detained by ICE in front of their kids. You can't have the AG writing polemics against End to End encryption and then try to recruit people out of Facebook into DoJ because they already know the head boss is full of it.

Sometimes you can't solve your recruitment problem by throwing money at the problem, or more scholarships, or reaching out to more people. A better solution would include an agency that is removed from these complications - entirely out of the executive structure, with a mission that attracted the best and brightest because they believed it was uncorrupted. We can still call it CISA!

But until we solve the personnel problem, we can't solve the other problems the Solarium report tries to address. And until we address the Culture and Clearance problems, we can't even begin.

The Solarium Review - What Sticks Out

Most comprehensive reviews of government policy have little-to-no impact, because they involve complex unpopular legislation, or implementation by an unwilling executive branch, or more often, both.

That's why it's understandable that the members of the Solarium have embarked on a marketing tour, doing podcast after podcast and panel after panel to sell not just the ideas in their paper, but the idea that these things have a hope of getting implemented. It may even be true! To that end, it's good to look at many of the ideas with a critical eye, and in depth.

Some things immediately stand out:

Each of these items requires a massive paper to analyze. The lack of a stance on E2E encryption while at the same time throughout the document giving the standard polemic on public private-partnership evidences that the Commission was not of the view that the overall technical community needed to be wooed - that you can on one hand go to war with the community on major issues key to their worldview, and on the other hand recruit, retain, and partner with them. This is not how the world works. They missed a once-in-a-decade opportunity.

For CISA - which is under DHS - there are two major issues:

The software liability issue is complex but any detailed look at it can talk about how weird many of the ideas on this section are.  As Perri would say "There are too many issues in this section to list." Although, to be fair, a future blogpost will do so.

Posted by Dave Aitel at 1:00 PM No comments: