While in Kyoto, a comprehensive review of Cyberpunk 2077 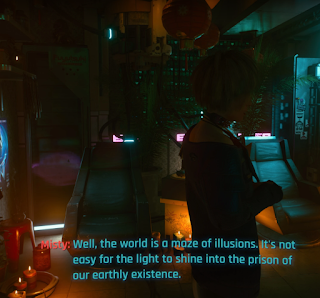 Until recently I hadn't realized just how terrible I was at playing video games. And now after finishing Cyberpunk and watching a bunch of "spoiler" reviews I realize most people think the goal of these games is to increase some stats numbers so that the already braindead enemy AI is somehow even easier to beat up. Anyways, here's how you play open world video games, or as they will be known in the future: Games.
1. Don't watch tips videos of any kind or read articles on the "best netrunner build" or any of that nonsense.
2. When you create a character, it's like in DnD where you are pretending to BE that character. Try to keep your roleplaying consistent! But also, the goal is to experience the world, which means doing ALL the side missions and reading all the various little texts that lay around the world explaining everything.
3. By the time you reach the cyborg-alien end-boss you will have become death, the destroyer of worlds, but you will also be OF the world, and a piece of it will stay with you even when you log off.
Anyways, here's my one line review of Cyberpunk 2077: it's a goddam masterpiece of art. It is better in it's own way than GTAV's joyful nihilism, or RDR 2's detailed reminiscence,  Skyrim's pathological weirdness, or even Breath of the Wild's cultured perfection. People online have spent gallons of ink complaining about the various bugs, but you know what else has bugs? Everything.
We spent the last four years fuzzing out why having a unitary executive is as bad an idea as a monolithic kernel and so it didn't bother me in the slightest when some UI element wouldn't disappear or a car dropped in from nowhere. That's just part of the game - the world is a buggy place. 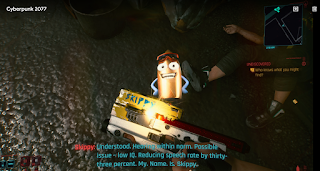 By "art", I don't mean the graphics, which, yes, are amazing - and in particular the animations of everything bring the characters to life in a way no other game really has - when some street busker plays a guitar, his fingers move in the correct chords in the correct times. What's truly exquisite about Cyberpunk 2077 is the writing and story and world creation. At the end, as a guard walks you to your cell/hospital room, he recites a poem to you, although the world is purple due to malfunctioning neural connections, and the concept of "you" itself has taken a royal beating.
While in Kyoto, I hear the cuckoo calling,
and long for Kyoto.
This is a fairly famous Basho Haiku, but it's a BETTER TRANSLATION than the most popular ones you will find on the internet or in books. And that's how the game's world building works: It's a better translation of the Cyberpunk gestalt than the books and movies that came before it. 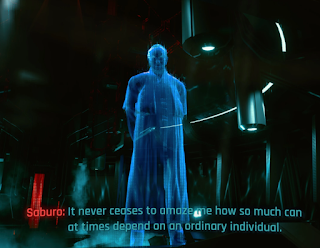 It's possible that this game is not as good if you have not been immersed nearly from birth in hacker culture. We slip into the lingo of this game like it was tattooed on us underneath our clothes. Cyberpunk as a genre has always been about a crisis of identity as the wave of modern technology washes over it - of the concept of identity, not of any one person's identity.

Seeing a fully realized vision like this is always surprising, like the way puzzles in BOTW tie to the physics engine so beautifully. In Cyberpunk, the physics engine may be janky but it's the philosophical engine that thrums smoothly just beneath the surface of everything. 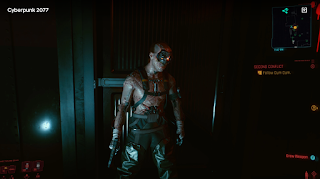 One of your first missions introduces you to a clan of post-humanoids, living like everyone else in the world does, through savage grift. They all have faces heavily augmented with metallic cybernetics and it's not until almost at the end of the story that you realize they....look down upon you. Normal humans can't see and hear the things they do. They have music you can't "get". "Dum Dum" is anything but.
One thing that strikes me is how few animals there are now in the real world, compared to when I was a kid. Cyberpunk takes that to its logical extreme - there just aren't any animals. Seeing a feral cat is a treasured experience for the people in this world. Everything is covered in trash - plastic bags of it line every waterway. Various "tips and tricks" on YouTube point out that in the early game you should pick up every little dildo and ashtray and other flotsam that the world is littered with and sell it for spare cash without commenting on why this is so.

If we look into the future, how could this not be the world we created? A newscaster reminds you the city's population has decreased by thirty percent year on year. But this is not a dystopian vision - it's a story of survival at all costs. Of what you have to become to exist. Our society has grown so long we forget they can also contract.
In Cyberpunk's Night City, which is in California, even the weather has changed - sandstorms, but also smogstorms, to the point where the giant solar power farms just outside the city are being decommissioned. All of this is relayed as news while you take an elevator, or snippets of text in documents throughout the city, or in odd bits of optional dialog.
I've noticed that movies no longer hold anyone's attention - they are both too long and too short. But the characters in Cyberpunk are fully fleshed out - they get more screentime than even a major character would in a blockbuster. And the motivations and drivers behind them are carefully crafted - the ending words of the primary antagonist drive into you like a stake. You slot his inevitable and horrible death as you realize you are the unwitting tool of his evil father.

The most poignant missions in the game have no shooting at all. Yet they require your participation, which is the sine-qua-non of the artform that is video games at this level. You can't help but be blended at some level with the character you play. 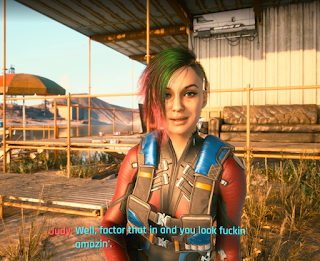 The truth is shooting things is ultimately a futile endeavor if you don't understand the world you live in. I recommend you take the time to experience the depth of the world they created, because it's worth confronting in a way few games are. 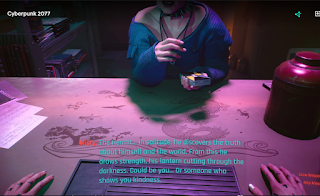 Posted by Dave Aitel at 9:29 PM No comments: