Cyber Lunarium Commission #001: The Case for Cyber Letters of Marque

Cyber Lunarium Commission #001:
The Case for Cyber Letters of Marque

The Cyber Lunarium Commission was established to propose novel approaches to United States cyber strategy grounded in technical and operational realities. The commissioners of the CLC “moonlight” in cyber policy, drawing upon their experiences in government, military, industry, and academia.

The Cyber Lunarium Commission can be reached at cyberlunarium@gmail.com and followed at @CyberLunarium.
---

The United States is losing ground in cyberspace. We are faced with adversaries who have benefited from rapid proliferation of commercial hacking capabilities. We are blocked by outdated legal frameworks, sluggish procurement practices, and a national talent pool we struggle to harness. In order to retain our dominance we must evolve our strategies. One solution may be found within the Constitution itself - letters of marque.

What is a Letter of Marque?
In 2007, Rep. Ron Paul introduced H.R.3216, the Marque and Reprisal Act of 2007, an act to allow the President to issue letters of marque against Osama bin Laden, al-Qaeda, and co-conspirators involved in 9/11. While this bill never passed, it brought up a fascinating question - do letters of marque have a place in modern conflict?

In Article I, Section 8, the Constitution establishes Congress’ authority to “grant letters of marque and reprisal.” These letters are commissions allowing holders to engage in privateering - in other words, historically allowing private operators to attack or capture the maritime vessels of adversary or criminal actors, without the need for the government to provide direct command-and-control. Both Revolutionary American forces and the post-Constitutional Convention US Congress employed this authority several times, most notably to fight piracy off the Barbary Coast in 1805, and against British maritime targets during the War of 1812.

The concept of “cyber letters of marque” (CLoM) comes up every few years in online cyber policy discussions. CLoMs would harness legal reform to allow private operators to conduct limited cyber operations at the direction of the US government and - in some limited cases - hack back.

Why Letters of Marque?
Cyber power depends on our national ability to leverage technical and operational prowess to achieve desired outcomes across political, military, and economic domains, at scale and over multiple concurrent operations. US cyber freedom of action relies on our nation’s ability to not only discover and create vulnerabilities in technology systems, but to then operationalize these accesses, while simultaneously denying our adversaries the ability to do the same.

By stealing US intellectual property, and using their indigenously developed technologies to project power, foreign adversaries are threatening our technical dominance. Domestically, we face a depleted workforce, damaging leaks, and restrictive legal regimes around cyber operations.

The international market for offensive cyber capability is also increasingly moving to “access-as-a-service” (AaaS) offerings. With AaaS, governments or other actors purchase access to compromised devices, or even fully managed cyber operations from private contractors. Successful examples of AaaS include criminal botnet sales, commercialized cyberespionage offered by Indian companies, and high-end mobile hacking operations offered by the controversial NSO Group. In addition to leveraging these companies for intelligence, foreign countries that house AaaS companies gain an experienced cyber workforce and grow their cyber security economy as the companies grow. The United States, by contrast, currently has few ways to utilize its own domestic hackers aside from direct employment with government or government contractors.

If the US is to regain dominance in cyberspace, we must lean into the winds of change already blowing - leveraging and empowering cyber talent outside of government to operate in cyberspace without fear of prosecution - naturally with appropriate legal oversight. Paired with American free market ingenuity and robust oversight mechanisms borrowed from existing federal agencies and structures, the disruptive potential for cyber letters of marque is profound.

Operating Concepts
CLoMs could be employed for a variety of operating concepts, but would never eclipse government operations - instead acting as a force multiplier and enabler. As it stands, the right to conduct cyber operations is reserved for government employees under special legal authorities (Titles 10 and 50).

CLoMs would not be used for high risk operations (e.g., intelligence collection against foreign heads of state, or “left-of-launch” missile defense operations). These letters could provide a valuable tool against targets such as ISIL, or serve as a way to leverage niche or short-term capabilities against targets of opportunity that appear and disappear before a government program could be leveraged against them. In severe cases, CLoM authorized-operations could even be used as a deterrence measure against foreign organizations that have broken US law and threatened US national security.

CLoM Operating Groups
Operations under CLoM would be carried out by businesses within the US similar to those involved in commercial sales of 0day exploits and other offensive cyber capabilities. In other words, boutique firms offering deep technical skill, specialized subject matter expertise, and innovative tooling working in conjunction with traditional defense industrial base companies managing less glamorous issues and manpower-intensive engineering problems.

US companies holding CLoMs could hire cyber talent in the private sector and veterans of the US intelligence community and military, providing them with an additional option other than directly working in government or its contractors to legally work on offensive cyber challenges.

CLoMs would provide indemnity from prosecution in the US legal system for otherwise “illegal” computer hacking activity in violation of the outdated 1986 Computer Fraud and Abuse Act (CFAA) and other pertinent statutes, against non-US entities. As private citizens protected inside the US, CLoM operators would have to assume the risks of foreign prosecution for their actions - though the US would not extradite CLoM holders.

In order to protect CLoM operators, the specific identities of groups carrying out these operations would be kept private, but announcement and fact of issuance of CLoMs could be made public in some circumstances (e.g., after operations have taken place successfully, or upon authorization of “hackback” style CLoMs to project a deterrent effect against would-be attackers).

Oversight
Congressional involvement in issuing CLoMs would help normalize cyber operations as a tool of national power, bringing them out of the shadows of classified Executive Branch programs where they have traditionally been housed.

Rather than holding whole-of-Congress referendums for each CLoM, Congress could delegate authority to a select or special committee drawing upon expertise from committees on defense, intelligence, foreign affairs, government oversight, etc. Congressional authorization of CLoMs would ideally also be worked in conjunction with relevant stakeholder agencies across government.

CLoMs would only be issued to actors deemed trustworthy and qualified. While operations under CLoM would ideally be conducted at the unclassified level, members of CLoM operating companies could be required to maintain clearances to facilitate communication of targeting, deconfliction, and counterintelligence information.

Granting authority to legally engage in cyber operations to non-government operators may be seen as “norms violating.” However, internationally, delegating authority is in fact the norm - a concept of operations that China has embraced with particular vigor.

Future Reporting
This is the first report of the Cyber Lunarium Commission. Over the coming days, we will publish three additional reports exploring various operating concepts that CLoMs could enable: privatized counter-ISIL cyber operations, access-as-a-service IoT offerings, and limited “hackback”-style reprisal operations against adversaries.
Posted by Cyber Lunarium Commission at 7:34 AM No comments:

Chinese Games have Ring0 on Everything

Like many of you, my kids love Doom Eternal, Valorant, Overwatch, Fortnite, Plants Vs Zombies, Team Fortress 2,  and many other video games that involve some shooting stuff but mostly calling each other names over the internet. I, on the other hand, often play a game called "Zoom calls where people try to explain what IS and IS NOT critical infrastructure".
Back in the day (two decades ago) when Brandon Baker was at Microsoft writing Palladium, which then became the Next Generation Trusted Computing Base, I had a lot of questions, and the easiest way to answer those questions was "How would you create a GnuPG binary that could run on an untrusted kernel, which could still encrypt files without the kernel being able to get the keys?" You end up with memory fencing and a chain of trust that comes from Dell and signing and sealing and trusted peripherals and all that good stuff.
The other thing people penciled out was "Remote Attestation" which essentially was "How do you play Quake 2 online and prove to the SERVER that you're not cheating." In this sense, Trusted Computing is not so much Trusted BY the User, but Trusted AGAINST the User. 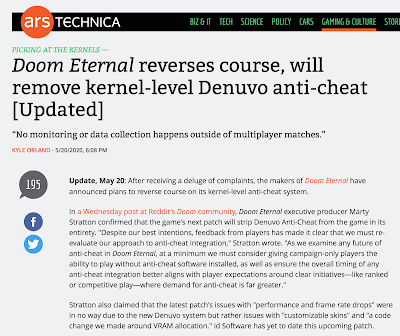 Doom Eternal removed their Ring0 anti-cheat but it's not that competitive a game really, especially compared to Valorant or Plants vs. Zombies
Because writing game cheats is somehow (in this dystopia) extremely lucrative (see this Immunity presentation on it),  game developers have quite logically invested in a budget implementation of Remote Attestation, largely by including mandatory kernel drivers which get installed alongside your game. These kernel drivers sometimes load bytecode from the internet, are encrypted and obfuscated, and have a wide view of what is running on your system - one you as the gamer or security analyst can not interpret any more than you can what scripts are run by your AV.
To add to your paranoia, as you probably DON'T know, most gaming companies are owned or controlled by Tencent, a Chinese conglomerate which is also very active in cyber security, so to speak, even though they are often headquartered in the US.
To put it directly, nobody wants to say that Tencent can control nearly every machine in the world via obfuscated bytecode that runs directly in the kernel, but it's not a whole lot of steps between here and there. Of course, aside from direct manipulation gaming data, which includes lots of PII, offers a massive value to any SIGINT organization, has huge implications for running COVCOM networks (c.f. the plot of Homeland), and is generally a high value target simply because it is assumed to be such a low value target.
We spend so much of our time trying to define critical infrastructure, but one easy way is to think about your network posture from an attacker's perspective, which hopefully this blogpost did without raising your quarantine-shredded anxiety levels too much.
-----
Posted by Dave Aitel at 11:29 AM No comments: