How ‘Active Defense’ Would Work

In many cases American (and other Western) companies know they have had an intrusion and even who the beneficiary is - but cannot prove it because to do so would require information only available on a remote server in another country, one typically unresponsive to subpoenas from the American court system.

Likewise, large scale botnets and worms such as Mirai can be difficult to combat as no public agency has the authority (and desire) to conduct the necessary international trespasses for the public good. And while penetrating carder forums and child abuse imagery trading websites on the Dark Web can be done by the largest law enforcement agencies, it's time to prepare for a specialist arm that can support all of law enforcement.

In addition, there is a talent problem. Even if there was a clear authority for many of these issues, the US Government does not have an additional natural critical mass of experienced hackers and management teams necessary to safely mount these sorts of operations.

No intelligence community arm is aimed at defeating economic cyber espionage on behalf of American industry. Nor should this become a priority of the foreign intelligence community’s mission. While the protection of the American industrial base is a strategic goal, there are limited resources within the IC and penetrating Chinese corporations which are not involved in military applications is a problematic thing to do for the NSA and CIA.

The first order desired goal is the end of widespread economic cyber espionage, which at scale, is a national security issue, but individually is a law enforcement issue. No Chinese/Russian company would receive stolen American R&D intellectual property or sales plans if it knew that accepting that information could lead to heavy personal and corporate legal sanctions.

Essentially, we want to have a chilling effect on cyber economic espionage while providing the beginnings of the ability to deal with wide ranging international systemic threats such as the Mirai worm, leveraging the deep bench of penetration testing talent and resources available in the private sector to do this without impacting our intelligence community missions. 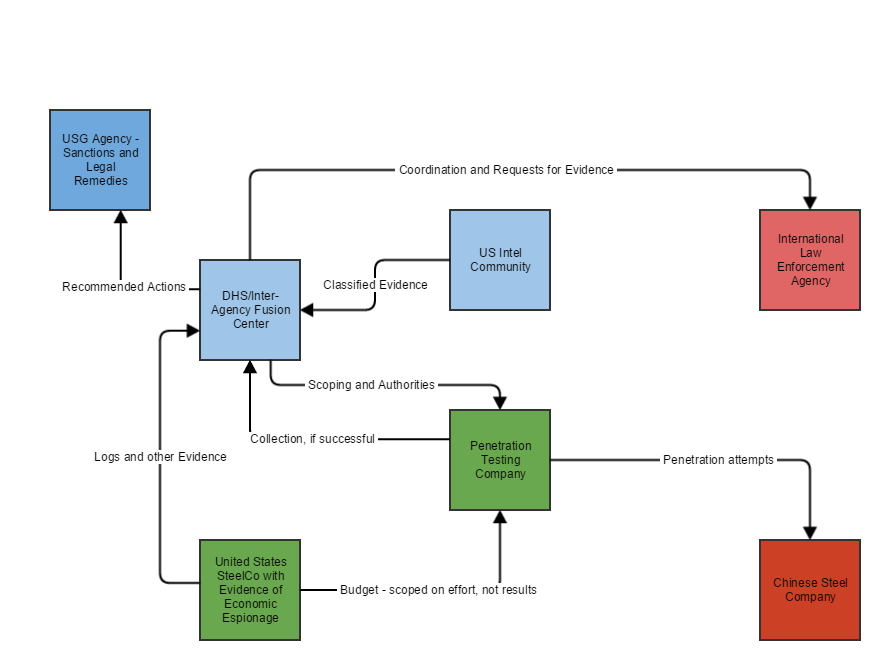 Escalation into a cyber war or a trade war is most commonly cited concern with this kind of structure for normalized hack-back. But there's no reason to assume that "cyber war" will escalate when countries have the option to simply being responsive to law enforcement requests. The key to avoiding escalation in this case is splitting the effort from traditional IC (which can be involved in battleground preparation operations), and massive transparency as to the scoping and goal of this agency's work.

Another question is why is there a private sector penetration testing company involved at all? Why not do this entirely in-house in a law enforcement agency? The answer is twofold:

Of course, if this model works well, the vast majority of these efforts would end with no hacking at all, simply subpoena and information requests between two law enforcement agencies.

How would this model work for other countries?

Other (smaller) countries may not see this model as necessary in terms of the private-public partnership. They may want to make it entirely a law enforcement agency function, because they would manage the moral hazard issue more directly that way and they don’t face talent or culture problems and have a history of joining LE and SIGINT functions.

But the truth is of course that many smaller countries will simply want to have the American cyber security umbrella also apply to their companies, and will work on bilateral agreements to make this possible.

Are you just suggesting this model because you want to do the work?

It’s extremely unlikely Immunity, a small business located in Miami and Argentina with a huge foreign national component would be eligible for this kind of business, although those involved might buy INNUENDO and CANVAS and SILICA (as practically everyone in the industry already does). I assure you this will not drastically affect our profitability.

How do other countries trust this process is not itself committing espionage?

This is where measures typical in International Relations such as having, say, Chinese/Russian observers become part of the process. Likewise, this is a great argument for having the tools and techniques and infrastructure for this effort be completely distinct from intelligence community toolchains, and at some level attributable at a group level using specific technical means.

What crimes other than straight economic espionage would this model apply to?

We have a problem in that many crimes in cyberspace are viewed very differently by different countries. For example, posts that defame the Royalty of a country on Twitter are viewed as capital crimes by some countries. What do we do when they send us a subpoena to unmask an anonymous poster of such content, which we would consider protected speech? Are they within their rights under this framework to go active against Twitter?

Those are still painful and unanswered questions.

Isn’t this super risky? What if you break something?

We already handle these issues in SIGINT collection quite well - or at least, well enough to not fear arbitrary escalation when we make mistakes. It's possible that having the best technical talent the industry has to offer is a net benefit in this way, as it will reduce unfortunate side effects.

Some Resources On This Subject

In many cases, a narrative explains these concepts better than anything else. So below is a hypothetical walk-through of how this could function.

US SteelCo is in the practice of building a new method for creating high tensile steel girders exposed to tropical environments. The goal is to market them into the Caribbean for anti-hurricane buildings which are now more in demand due to Global Warming. The methodology of creating these girders involves dousing them in a cooled molybdenum bath at a precise time during the tempering of the steel. They go through months of testing to determine the exact right formula and finally make a breakthrough.

Unbeknownst to them, a Chinese hacker has been waiting for just such a breakthrough and is resident on their main mail server using a variant of a trojan he also sold to the PRC Army team.  He pulls the PDF and some notes on the methodology from a triumphant email sent to the management team and then has them translated into Chinese using a Beijing translation service he is friends with. He then sells that information to a Chinese Fusion Center where it is noticed by a local mega-company ChinaSteel which then decides to invest in a brief market exploration of the girders produced by this technique. They have some success locally in the southern Chinese market and then expand into the Pacific and Caribbean tropics.

A few months later a SteelCo sales team has one of its Bahamian customers hand it a sales pamphlet from ChinaSteel that has the exact same parameters for steel girders. It cannot be coincidence. At first, they assume one of their own technology team has left with the valuable formula, but after an internal investigation, done entirely in person in a hotel room offsite, they place a quick phone call to their FBI contact from the local Infraguard meeting, and she sets them up with a meeting at the local Active Defense fusion center, where they present their case.

The board of directors of SteelCo meets as well, and decides to put a budget towards tracking this issue down. Once the DHS officials working at Active Defense look at the evidence, they connect them with a licensed Investigator firm who constructs a simple Word document that pings back to covert infrastructure created for the test. The engineering team at SteelCo fakes a new announcement of an advance in the formula configuration, and then emails it to the SteelCo executive team, where it is caught by the Chinese hacker’s implant.

A simple HTTP connection ping is made from the Beijing-based translator as they work on the new file, urgently passing it onto their customer at ChinaSteel. With this evidence in hand, the Investigator firm packages a request for additional scope to the Active Defense DHS point of contact. The DHS team looks through their history with the Chinese authorities and notes that they have been previously unresponsive to efforts to get information from this exact translation firm.

Once approved, they began a more thorough exploration of the servers the translation team runs, using a simple phishing document and a custom 0day to penetrate the pirated Windows XP laptop the company uses. Once inside, they find evidence of years of ongoing economic espionage, for both ChinaSteel, and many other “customers”.

This evidence then goes, not to US SteelCo, but to the DHS Active Defense team and then onwards to the US Agencies responsible for enforcing legal sanctions. When ChinaSteel’s management team meets later that year to discuss the yearly strategy, they implement a global policy to not use information from the Fusion center to shortcut their R&D, as it has damaged both their brand, and their bottom line.
---