Baltimore is not EternalBlue

Recently a misleading and terribly researched article (via  Nicole Perlroth and Scott Shane) came out in the NYT which essentially blamed the NSA and ETERNALBLUE for various ransomeware attacks on American city governments, including Baltimore. This then ballooned to PBS and the BBC and a bunch of other places, all of which parroted its nonsense.

For starters, when you research the malware in question, it is something called "RobinHood", which has been analyzed here.

Explicitly, all available analysis claims it gets basically manually installed on the targets, probably after someone gets phished or a simple web exploit is used to break into a network. It's also fairly hard to believe that ETERNALBLUE is truly in play considering it has been patched for TWO YEARS and the OS it was useful against (Windows 7/2008) is due to be EOLed by Microsoft next year. And while yes, MS08-067 was useful on penetration tests for a long time, and no doubt ETERNALBLUE will always be useful somewhere, on geriatric machines left in closets next to Wang computers and the odd SPARC workstation, it's not going to be a professional ransomware crew's goto, because it would alert everyone and probably never work.

Generally what everyone uses for lateral movement is Active Directory. You can learn more about it from Microsoft Research themselves in this Infiltrate2015 talk! Because this is a design flaw, it's not something you can really patch.

First of all, "NOBUS" when used officially means only capabilities controlled by strong cryptography - exploits are never in that category. They are always a risk/reward calculation. Secondarily hackers had amazing exploits during the Cambrian explosion after the 1996 papers on buffer overflows came out. Here is a talk from Infiltrate2019 which covers a bit of the history. 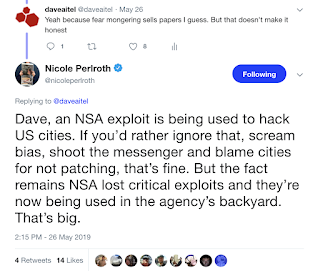 I'm not sure what their UNNAMED BUT AMAZING sources said about ETERNALBLUE and the Baltimore ransomeware attack, but you have to apply a bit of basic cognition to the question and that particular exploit being used to do lateral movement for this ransomware is neither supported by any public facts, nor my own sources on the issue.

In addition, it is hard to say that ETERNALBLUE is anything other than the particular exploit leaked by the SHADOWBROKERS. Metasploit and many others have released combo-packs targeting many vulns fixed in that patch to provide more reliable exploits against many more target operating systems. Once a patch comes out, no matter who found the bug that led the patch, anyone can reverse engineer the patch to write an exploit. SO IT DOESN'T MATTER IF A BUG IS LEAKED/FOUND OR DISCOVERED INTERNALLY BY MICROSOFT IN TERMS OF RISK IF YOU HAVEN'T PATCHED TWO YEARS LATER. This is unfortunately a point that has to be made since Nicole and Scott started their bizarre and baseless ideological blame-game.