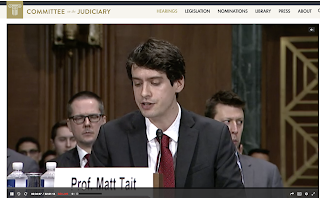 For any dying government policy there's going to be a set of policy experts that advocate keeping it in the interests of Stability. Crypto policy is no different from the principle of Prima Nocta in that way. You can see this in Cyrus Vance's testimony, which harkened back to the balance of power when CALEA was signed into law. CALEA was 25 years ago. Has anything changed since then, do you think? It is the OK BOOMER of surveillance balances.

What's really changed, since today Judaism is being defined as a nationality for some reason, is the public's awareness that maybe giving governments free access to our deepest secrets is not a great idea. What governments always say is "Terrorism, Child Exploitation Materials, Murders and Serious Crimes" but what they mean is "War on Drugs and political resistance".  Senator Kennedy probably was the most pessimistic person on the panel, and literally said "Your companies don't care what we think, do they? They don't trust governments." But it's not the companies that don't trust governments so much as everybody in general.

The Government (and Matt Tait's) argument is pretty simple: We need a balance that allows the Government access to anything stored on your phone at any time. They'll say "decrypted when presented with a lawful court order" but Apple's policy is even simpler: "No."

There were a couple obvious fallacies from the pro Key-Escrow testimony from Matt Tait and Cyrus Vance.


I get that Surveillance-Authoritarianism is the pumpkin spice of this decade's political season - you get a bit of it with everything. At one point one of the Senators said "Is Apple willing to take liability for any attack that could have been prevented by a decryptable device?" which is an insane question, since Apple is ALSO not willing to take liability for any damage from an unencrypted device falling into the wrong hands, nor is the Government able to prevent Apple from BEING ATTACKED BY OTHER NATION-STATES or willing to take THAT liability. 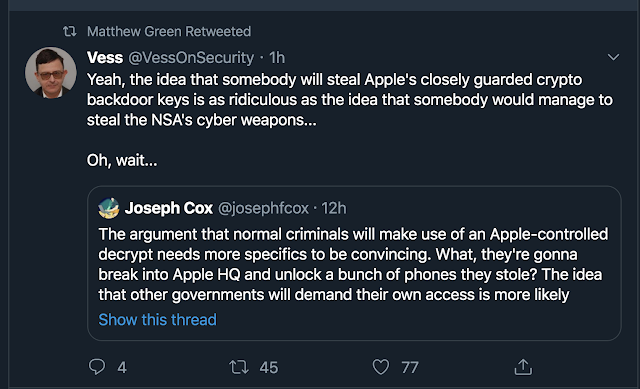 It's not possible to do key escrow as a matter of legislative policy. Even assuming a law passed that mandated it, Apple and Google would also have to magically ban any application that disabled it. This is something Apple could do to non-Jailbroken devices the same way they ban VPN services in China, but it's not something Google can do on their platform. And you cannot do key escrow without making devices less safe - Matt Tait is 100% wrong about this being a technologically feasible effort.

Lindsay Graham said point blank that if Industry doesn't magically solve this problem for him, then he's going to pass legislation about it, and there was a big bipartisan show on the floor of both support and opposition, which makes it hard to say if there's an actual plausible threat there (unlikely). But the deal has already been cast: What Law Enforcement wants out of the cloud, it can have. What it wants from the device, it cannot.