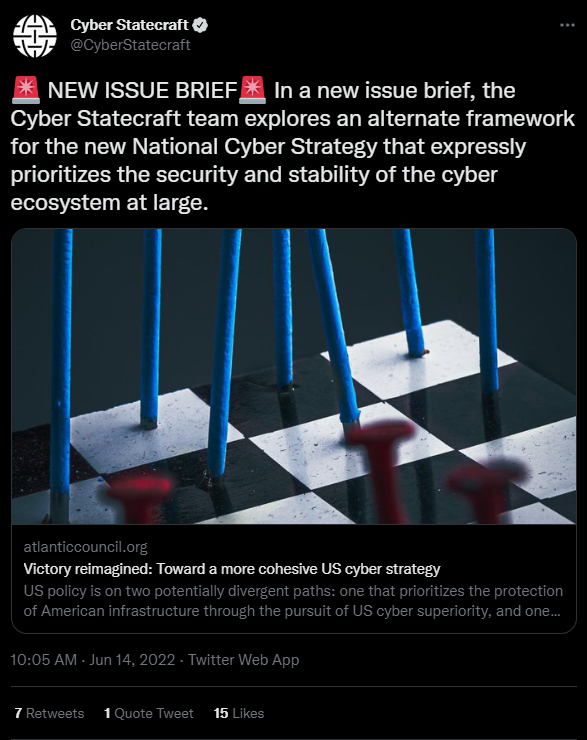 One thing I liked about the new Cyber Statecraft paper is it had some POETRY to the language for once! Usually these things are written by a committee that sucks all the life out of it.

I have a number of thoughts on it though.

First of all: Defend Forward is not the totality of the shift in thinking that is happening out of the DoD, which is more properly labeled "initiative persistence" or "persistent engagement" perhaps? There's a LOT to it, of which Defend Forward is a tiny tiny piece.

"A revised national cyber strategy should: (1) enhance security in the face of a wider range of threats than just the most strategic adversaries, (2) better coordinate efforts toward protection and security with allies and partners, and (3) focus on bolstering the resilience of the cyber ecosystem, rather than merely reducing harm."

It is EXTREMELY weird that we can plan for Finland to join NATO in a conventional sense but not a cyber sense - it feels like there is maybe a gap in terms of our coordination with NATO and other allies - meaning we don't properly understand how to project a security umbrella yet/still. Coordination is hard in cyber.

So it's difficult to disagree with these terms on their face - the evidence says that yes, low level behavior (ransomware) IS STRATEGIC - and, yeah, we treat it strategically. Coordination with allies always sounds good and "more partnering" does as well. Having more resilience is never a bad thing, right?

But a critique could easily be: Adding resilience to the internet is often about doing REALLY HARD THINGS. It is not about making VEP choices, the way some would want us to think it is.

It is more likely to be instituting 0patch and deny listing various untrustworthy software vendors across all US infrastructure, forcing Critical Infrastructure to use a Government EPS, and otherwise doing really unpopular things.

The FBI has been going around removing botnets. How can we get PROACTIVE ABOUT THAT - installing patches before systems even get hit? That's adding resilience.

I mean, looking at this all through a lens of counterinsurgency is not necessarily new: https://seclists.org/dailydave/2015/q2/12

Nobody has the illusion that we are going to achieve cyber superiority, like we got air superiority during the Iraq war. That's by definition not what initiative persistence is about!

Defend Forward itself can be instantiated in a few different ways, i.e. teams going out to help people and collect implants on Ukrainian systems, us hacking things we think someone else is going to hack, us hacking or using SIGINT/HUMINT on cyber offensive teams themselves. Literally none of these things require or assume cyber superiority.

US policy is on two potentially divergent paths: one that prioritizes the protection of US infrastructure through the pursuit of US cyber superiority, and one that seeks an open, secure cyber ecosystem.

It's also extremely hard to judge the value of these operations via public record. When they work, they largely remain covert, or occluded at the least.

While the author claims that Defend Forward is most useful against strategic adversaries - this is probably very not true as they are hardened targets. It's more that defend forward is a high resource requirement activity, for the large part. So you use it when you MUST not just when you CAN.

"This is not to say that Defend Forward is a bad strategy so much as it is not a strategy on its own and not a means of fully realizing the goals of the current US cybersecurity strategy. Indeed, its place as the paramount concept of US cyber strategy is in tension with broader US objectives of a secure and stable cyberspace."

Yeah I don't think anyone thinks Defend Forward is the whole breakfast.

"The Command Vision for US Cyber Command explicitly focuses on the actions of Russia and China, and relegates its considerations of a broader set of adversary operations impacting overall economic prosperity to a footnote"

Another way to put this is Cybercom is a STARTUP and doing their best with limited resources.

"The next US Cyber Strategy should take account of ongoing policy changes and redouble efforts to support public-private partnerships investing against capabilities and in infrastructure rather than just response. To aid smaller, less well-resourced companies, the US government should fund security tooling access and professional education for small-to-medium enterprises (SMEs) while working to improve the size and capacity of the cybersecurity workforce at a national scale. There have been several legislative efforts to effect such a change: HR 4515, the Small Business Development Center Cyber Training Act36 and the cybersecurity provisions within HR 5376, the Build Back Better Act.37 In addition, further legislation is required to make permanent the cybersecurity grant program under the recently passed infrastructure bill (Public Law 117-58) with the added guidance from the Cybersecurity and Infrastructure Security Agency (CISA).38"

Like, whatever. These are just random subsidies that don't help. If we have money sloshing around, then they probably don't hurt too much either. What we heard on the CISA call was that smaller CI companies basically want the government to take over their security responsibilities. But this is a huge deal. It's not something we can just do. Security is built into how your run your whole company.

"CISA, in cooperation with its Joint Cyber Defense Collaborative (JCDC), the Department of Justice, and the Treasury Department, should compile clear, updated guidance for victims of ransomware, including how victims unable or unwilling to make ransomware payments can request aid from the Cyber Response and Recovery Fund.39 Further legislation should focus on federal subsidies for access to basic, managed cybersecurity services like email filtering, secure file transfers, and identity and access management services."

Did a managed service provider write this? This is a very weird call for subsidies. Maybe instead the USG should make large software vendors not charge more for security features than for the base product?

"Adversaries, knowing this point of friction, would then benefit from moving through this grey space, pairing their operational goals with the strategic impact of forcing the United States to move against the interest of US allies."

I feel like whoever wrote this line has a very limited understanding of OCO. It's not wrong that the very idea of hacking random German boxes annoys the Germans. But that calls for responsible OCO efforts and communicating what those are. And of course, not all Defend Forward is OCO.

"This means a shared, or at least commonly understood, vision for the state of the domain, as well as agreement and understanding as to the acceptable methods of operation outside a state’s “territory” and through privately owned infrastructure."

In other words, wouldn't it be great if there was a norm against hacking certain things? Well....maybe! But this is an unreasonable ask. We are not getting real norms any time soon.

Similarly this kind of language is unrealistic:

United States Cyber Command (CYBERCOM) should coordinate explicitly with the defense entities of US allies to set expectations and parameters for Defend Forward operations. These should include agreed-on standards for disclosure of operations and upper limits on operational freedom to an appropriate degree, recognizing that such decisions are rarely black and white. Similarly, DoD should work with CISA’s JCDC to coordinate its offensive action with the largest private-sector entities through whose networks and technologies retaliatory blows, and subsequent operations, are likely to pass. This coordination should strive to establish a precedent for communication and cooperation as possible, recognizing the significant effect that offensive activities can have on defenders.

Cybercom should coordinate with Amazon and Microsoft because of potential retaliation? This is nonsense. It is someone hoping to kill a program that works and delivers results. Perhaps I'm being overly harsh - no doubt DoD already has relationships with these entities and does work through them in various aspects. But that doesn't mean they should have a veto or even pre-warning on various engagements. It's definitely true that taking side effects into consideration is a big part of being responsible when you do OCO in general (and defend forward in specific), but it's unlikely we are in a position now to have conversations about agreed-upon norms for these operations.

"However, the fallout from the incident also inspired questions about the apparent paradox of securing cyberspace by preparing weapons to compromise it.60"

We don't use these tools to "secure the internet". We use them to gather intelligence and help secure our nation.

"While there is language about the importance of improved ecosystem resilience throughout US cyber strategy documents, this topic deserves far richer treatment than a framing device."

If we actually wanted to improve the ecosystem, we would have explained to people that running VPNs that have Perl on them was a bad idea. We would stop using Sharepoint. We would publish the penetration testing results into a lot of modern equipment and let the transparency kill them off...

But this is politically impossible.

"A strong example of this would be public-private investment in memory-safe code that can reduce the prevalence of entire classes of vulnerability while providing the opportunity to prioritize mission-critical code in government and industry."

Yeah.....like why does the public need to invest in this. Rust exists. Java exists and the USG is one of the biggest developer shops for it. What are they trying to get USG to pay for exactly?

There's also a lot in this paper about giving more jobs to CISA JCDC which already has a ton of jobs. It cannot do everything.

"As the United States redevelops its national cyber strategy, the question of overall political intent must stand at the forefront. This strategy needs to clearly address the dissonance between the stated policy goals of protection and domain security—a tall order, but a feasible one. Proactive offensive cyber operations that protect US infrastructure and interests are, and will continue to be, necessary. But just as in counterinsurgencies of the past, the United States must ensure that it does not fall into a “strategy of tactics,”66 losing the war by winning the battles."

We should at least explain things better to our allies. That much is true. They possibly are really confused and confused means annoyed. But the rest of this paper is a lot of tilting at a strawman argument nobody in the DoD or elsewhere has put forth.